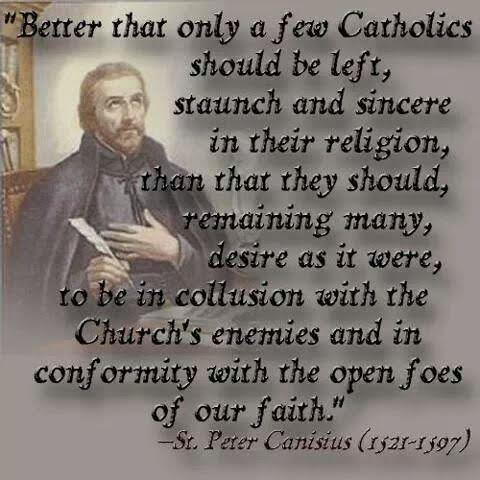 He was born in 1521 in Nijmegen in the Duchy of Guelders, which, until 1549, was part of the Habsburg Netherlands within the Holy Roman Empire and is now the Netherlands. His father was the wealthy burgermeister, Jacob Kanis; his mother, Ægidia van Houweningen, who died shortly after Peter’s birth. He was sent to study at the University of Cologne, where he earned a Master’s degree in 1540, at the age of 19. While there, he met Peter Faber, one of the founders of the Society of Jesus. Through him, Canisius became the first Dutchman to join the newly founded Society of Jesus in 1543.

Through his preaching and writings, Peter Canisius became one of the most influential Catholics of his time. He supervised the founding and maintenance of the first German-speaking Jesuit colleges, often with little resources at hand. At the same time he preached in the city and vicinity, and debated and taught in the university. Because of his frequent travels between the colleges, a tedious and dangerous occupation at the time, he became known as the Second Apostle of Germany.

Canisius also exerted a strong influence on the Emperor Ferdinand I. The king’s eldest son (later Maximilian II) appointed to the office of court preacher, Phauser, a married priest, who preached the Lutheran doctrine. Canisius warned Ferdinand I, verbally and in writing, and opposed Phauser in public disputations. Maximilian was obliged to dismiss Phauser and, on this account, the rest of his life he harboured a grudge against Canisius. 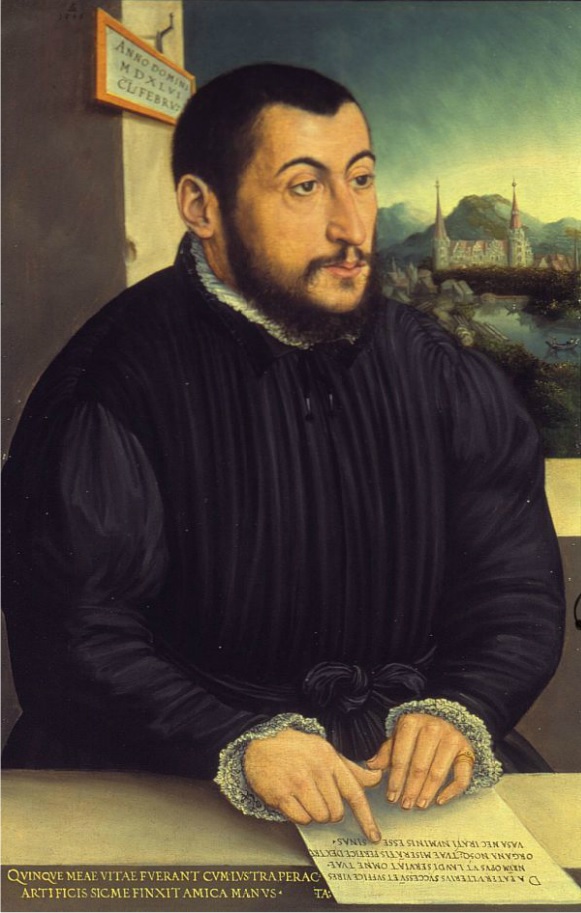 In 1547 he attended several sessions of the Council of Trent. Canisius was an influential teacher and preacher, especially through his “German Catechism”, a book which defined the basic principles of Catholicism in the German language and made them more accessible to readers in German-speaking countries. He was offered the post of Bishop of Vienna in 1554, but declined in order to continue his traveling and teachings. He did, however, serve as administrator of the Diocese of Vienna for one year, until a new bishop was appointed for it.

He moved to Germany, where he was one of the main Catholic theologians at the Colloquy of Worms in 1557, and later served as the main preacher in the Cathedral of Augsburg from 1559 to 1568, where he strongly witnessed to his faith on three or four occasions each week. Canisius was renowned as a popular preacher.

By the time he left Germany, the Society of Jesus in Germany had evolved from a small band of priests into a powerful tool of the Counter Reformation. Canisius spent the last twenty years of his life in Fribourg, Switzerland, where he founded the Jesuit preparatory school, the College of Saint Michael, which trained generations of young men for careers and future university studies.

In 1591, at the age of 70, Canisius suffered a stroke which left him partially paralyzed, but he continued to preach and write with the aid of a secretary until his death in Fribourg. He was initially buried at the Church of St. Nicholas. His remains were later transferred to the church of the Jesuit College, which he had founded and where he had spent the last year of his life, and interred in front of the main altar of the church; the room he occupied during those last months is now a chapel open for the veneration of the faithful. 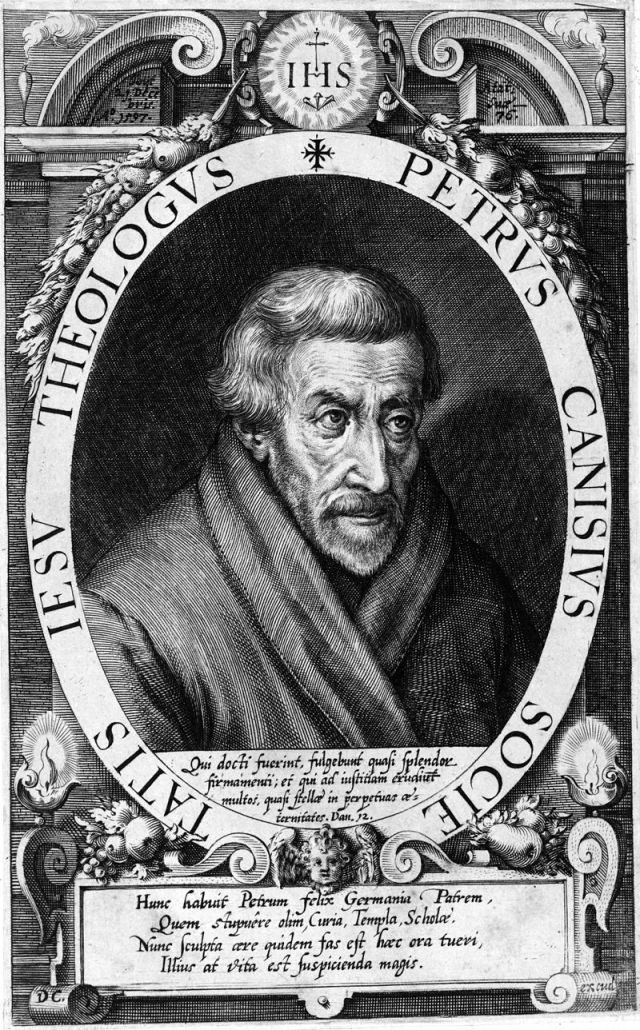 Canisius lived during the height of the Protestant Reformation and dedicated much of his work to the clarification of the Catholic faith in light of the emergence of the new Protestant doctrines. His lasting contribution is his three catechisms, which he published in Latin and German, which became widespread and popular in Catholic regions. In his fight with German Protestantism, he requested much more flexibility from Rome, arguing:

If you treat them right, the Germans will give you everything. Many err in matters of faith, but without arrogance. They err the German way, mostly honest, a bit simple-minded, but very open for everything Lutheran. An honest explanation of the faith would be much more effective than a polemical attack against reformers.

He rejected attacks against John Calvin and Melanchton: With words like these, we don’t cure patients, we make them incurable.

Canisius taught that, while there are many roads leading to Jesus Christ, for him the veneration of the Blessed Virgin Mary is the best. His sermons and letters document a clear preoccupation with Marian veneration. Under the heading “prayer” he explains the Ave Maria (Hail Mary), as the basis for Catholic Marian piety. Less known are his Marian books, in which he published prayers and contemplative texts. He is credited with adding to the Hail Mary the sentence Holy Mary, Mother of God, pray for us sinners. Eleven years later it was included in the Catechism of the Council of Trent of 1566.

Canisius published an applied Mariology for preachers, in which Mary is described in tender and warm words. He actively promoted the sodalities of our Lady and the rosary associations. Theologically, Canisius defended Catholic Mariology, in his 1577 book, De Maria Virgine Incomparabili et Dei Genitrice Sacrosancta Libri Quinque. The book was ordered by Pope Pius V to present a factual presentation of the Catholic Marian teachings in the Bible, the early Christians, the Church Fathers and contemporary theology. Canisius explains and documents Church teachings through the ages regarding the person and character of Mary, her virtues and youth. He traces historical documents about the perpetual virginity of Mary, and her freedom from sin. He explains the dogma of “Mother of God” with numerous quotations from the fathers after the Council of Ephesus. He shows that Church teaching has not changed. He answers the sola Scriptura arguments of Protestants by analyzing the biblical basis for Mariology.

Confessor and Doctor of the Church

In the midst of the Church the Lord opened his mouth: and filled him with the spirit of wisdom and understanding: He clothed him with a robe of glory. Ps. It is good to give praise to the Lord: and to sing to Thy Name, O Most High. Glory be to the Father.

O God, Who for the defence of the Catholic Faith didst strengthen blessed Peter, Thy confessor, with virtue and learning: vouchsafe in Thy loving kindness, that by his example and precepts the erring may be restored to salvation, and the faithful may persevere in the confession of the truth. Through our Lord.

Dearly beloved, I charge thee, before God and Jesus Christ, Who shall judge the living and the dead, by His coming and His kingdom: preach the word: be instant in season, out of season: reprove, entreat, rebuke in all patience and doctrine. For there shall be a time when they will not endure sound doctrine, but according to their own desires they will heap to themselves teachers, having itching ears, and will indeed turn away from the truth, but will be turned into fables. But be thou vigilant, labour in all things, do the work of an evangelist, fulfil thy ministry. Be sober. For I am even now ready to be sacrificed and the time of my dissolution is at hand. I have fought the good fight, I have finished my course, I have kept the faith. As to the rest, there is laid up for me a crown of justice, which the Lord, the just Judge, will render to me in that day: and not only to me, but to them also that love His coming.

Alleluia. The just man shall spring as the lily: and shall flourish forever before the Lord. Alleluia.

Alleluia, alleluia. V. The Lord loved him and adorned him: He clothed him with a robe of glory. Alleluia.

At that time, Jesus said to His disciples: You are the salt of the earth. But if the salt lose its savour, wherewith shall it be salted? It is good for nothing any more but to be cast out, and be trodden on by men. You are the light of the world. A city seated on a mountain cannot be hid. Neither do men light a candle and put it under a bushel but upon a candlestick, that it may shine to all that are before men that they may see your good works, and glorify your Father, Who is in heaven. Do not think that I am come to destroy the law or the prophets: I am not come to destroy, but to fulfill. For amen I say unto you, till heaven and earth pass, one jot or one tittle shall not pass of the law, till all be fulfilled. He therefore that shall break one of these least commandments, and so shall teach men, shall be called the least in the kingdom of heaven: but he that shall do and teach, he shall be called great in the kingdom of heaven.

The just shall flourish like the palm tree: he shall grow up like the cedar of Libanus. Alleluia.

May the holy prayer of Peter, Thy Doctor, fail us not, O Lord: may it render our offerings acceptable, and ever obtain for us Thy pardon. Through our Lord.

It is truly meet and just, right and availing unto salvation that at all times, but more especially at this season, we should extol Thy glory, O Lord, when Christ our Pasch was sacrificed. For He is the true Lamb that hath taken away the sins of the world. Who by dying hath overcome our death, and by rising again hath restored our life. And therefore with Angels and Archangels, with Thrones and Dominations, and with all the heavenly hosts, we sing a hymn to Thy glory, saying without ceasing:

The faithful and wise servant, whom his lord setteth over his family: to give them their measure of wheat in due season. Alleluia.

We beseech Thee, O Lord, that blessed Peter, Thy illustrious Doctor may join his prayers to ours that this sacrifice may bring us salvation. Through our Lord.